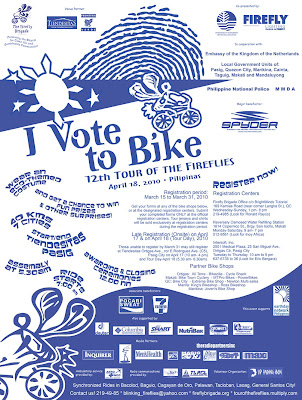 Every year, The Firefly Brigade holds The Tour of the Fireflies to promote the bicycle as a transportation alternative here in Metro Manila and also to raise awareness about pollution and the environment.  What do fireflies have to do with this? Decades ago, fireflies were a pretty common sight in the metropolis. But these days, you rarely get to see them, since they’ve fled the city in search of cleaner air.

This year’s Tour of the Fireflies is taking place on April 18, and it’s going to be a 40-kilometer ride across seven cities. Registration runs until March 31, 2010.