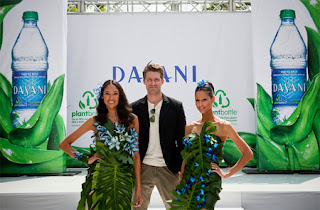 For Earth Day, Glee‘s Matthew Morrison played host to the DASANI Plant Model Fashion Show, which was held at The Grove in Los Angeles and featured outfits–all made from 100 percent plant–by Yotam Solomon. Apart from being a fashion show and a celebration of Solomon’s work, the event also launched the new DASANI Plant Bottle packaging; DASANI bottles are now eco-friendlier and are made up of 30 percent plant.

Shown on the left is Morrison with two of the models in the show. See the rest of the pictures on DASANI Plant Model Fashion Show’s Flickr.