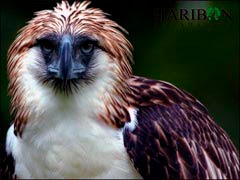 Now I’m not going to call myself the biggest fan of Manny Pacquiao, but I do agree with what he’s planning for his next project: saving the Philippine eagle.

Filipino boxing icon Manny ‘Pacman’ Pacquiao is the country’s newest defender of the Philippine eagle and donated to the Department of Environment and Natural Resources (DENR) PhP100,000 for its protection and conservation.

“I decided on this since the Philippine eagle is becoming extinct,” he said during a press conference Thursday at DENR’s headquarters in Quezon City where DENR Secretary Lito Atienza confirmed receiving the fund.

It’ll be interesting to see what he can do to raise awareness about the bird’s plight. I certainly hope that, given his money and influence, he’ll be able to make a difference.

Photo by Alejo P. Manaloto, taken from the Haribon page on the “Haring Ibon”