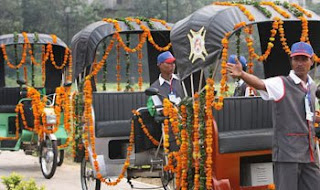 All over the world, the rickshaw is powered in different ways. Back in the old, old days, the rickshaw was human-powered, meaning the small carriage was hoisted up by men who run through the streets to transport the passengers. Probably eco-friendly and a good source of exercise, but while rickshaws like that are still in existence, many other cities have opted to replace foot power with bicycle or engine power.

In India, the engine-powered rickshaw is more common, but they’re starting to rethink this mode of transportation–and they’ve come up with something great. The Council of Scientific and Industrial Research (CSIR) has developed the Soleckshaw for New Delhi, a feat that took them all of eight months.

“The dual-powered Soleckshaw is the CSIR’s solution for the dual problem of decent employment generation for the masses and mitigation of global warming,” a CSIR official said.

Charging stations for the Soleckshaw have also been developed. The Soleckshaw seats three people including the driver and runs up to 15 km (9 miles) an hour.