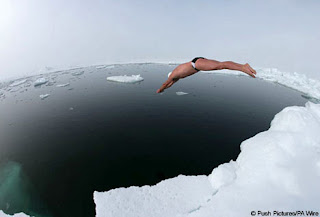 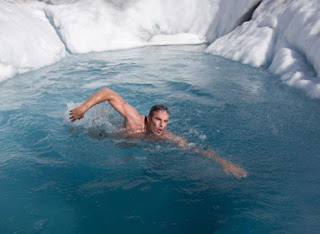 (photos from the Daily Mail)
For twenty years, Lewis Gordon Pugh has been swimming in the world’s five oceans to draw attention to climate change. On 15 July 2007, the lawyer -turned-World Wildlife Fund ambassador became the first person to swim long distance at the geographic North Pole in minus 1.8C waters. He swam 1 kilometre in 18 minutes 50 seconds. The waters in and around the North Pole are warmer now than ten years ago and the swim would not have been possible then. He was accompanied by Jørgen Amundsen, a relative of Roald Amundsen, the first person to walk to the South Pole. Critics of his swimming expeditions argue that he wastes energy producing the daily ton and a half of ice for his training swimming pool, as well as fuel for the ice breaker ships and planes. Lewis being an environmentalist, I would assume he is doing his part to offset these. It is still an amazing feat and if swimming is his way of drawing attention to global warming, I wish him luck on future expeditions.