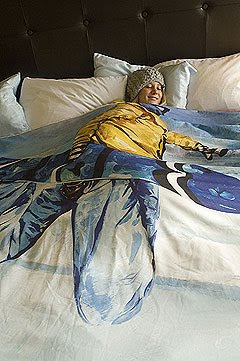 US snowboarder and Olympic champion Hannah Teter is one cool dudette. She donates all her winnings to support the Kenyan village of Kirindon. The Vermont native founded Hannah’s Gold, selling maple syrup to provide safe drinking water, support sustainable farming and build schools in the village, among other initiatives. Ben and Jerry’s named a flavor after her, Maple Blondie, with a portion of sales going to the charity. The athlete has raised funds for Darfur and is a spokesperson for Boarding for Breast Cancer.

Since the Haitian earthquake, she’s donated prize money to the relief effort. During these Vancouver Olympic Games, Hannah has been selling underwear for Doctors without Borders. Ms. Teter has also been sleeping under an AMP energy quilt to be auctioned off at the end of the Winter Games. In addition, AMP will donate $20,100 to her charity. The 2006 gold and 2010 silver Olympic medalist helped design the quilt, which has bamboo buttons and is made from all organic material.

Ms. Teter is a vegetarian and plans to go off-grid and move into her parents’ yurt when she returns home. Kudos to this young lady! She is a champ, on and off the halfpipe.