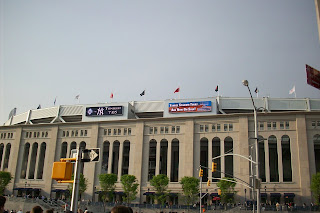 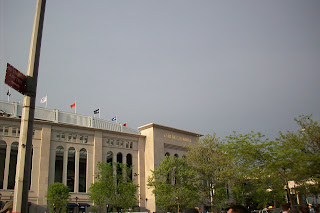 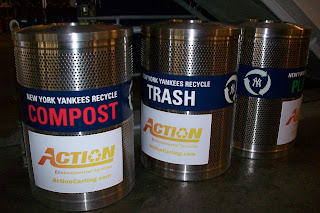 I was surprised and impressed to see this compost bin alongside the trash and plastic recycle bins at the new Yankee Stadium. The designers included environment friendly features like energy-efficient lighting (in fact during the game, some of the lights around the stadium were kept off), water-saving plumbing, waterless soap and hands-free faucets in the restrooms, and no air conditioning in the retail areas. There were a variety of foods available, even fruits and vegetable stands. And according to the press release, “Beverage cups in the Stadium are made of biodegradable material instead of petroleum-based plastics, and the Yankees are committed to purchasing paper products that are 100% recyclable. By composting and recycling cardboard, glass, metal, plastics and paper, approximately 40% of the Stadium’s trash should be diverted away from landfills, resulting in fewer trash pickups.”

Although I’m still not convinced NY needed a new stadium and its energy consumption is probably stratospheric (not to mention the sky-high ticket prices to watch a game), I suppose their greening efforts are laudable.