Not having grown up in the US, I was puzzled when I read a book about Christmas when I was little, because the people in the book strung up popcorn all around their Christmas tree. My immediate thought was, “What if mice and roaches get at the popcorn first?” Clearly, edible decorations were an alien concept to me in the past. These days, I like to tinker with the idea of edible decorations, though I still won’t be stringing popcorn around the fake Christmas tree at home (Nope, fresh, real trees aren’t available here in the Philippines). 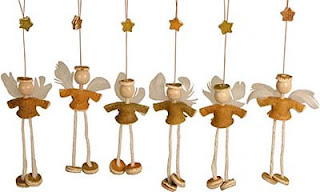 Anyway, I just discovered this interesting idea for Christmas decorations–ones that are made out of orange peel. Okay, the material isn’t edible, but, hey, at least that means you won’t be tossing out the peels after you’re done with the fruit.

Talented Colombians and Bolivians turn orange peels (shown left), ordinarily a waste product, into artistic creations. What started out as a hobby has expanded a business, and has engaged many other members of the community. These women help supply orange peels and produce these Christmas decorations and boxes. They’re earning a fair wage to help their families, and the money is often spent on the education of their children.

It’s a cute and clever use of waste items, plus the items look unique too, making them a cool conversation piece at your holiday parties. Some of the items, like the angels, the garland, and the star ornaments, look like they can be used year-round too, not just during Christmas.