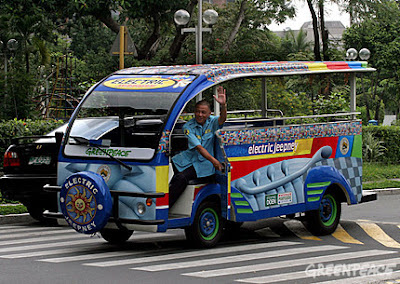 Two electric-powered Jeepneys or E-Jeepneys will start plying Makati City’s streets today as part of a pilot testing phase to fine tune the innovative transport’s adaptability as a commercial public transport in the country’s premier business district. The E-Jeepneys, presented to the public in a press launch in the city last July 4 by the Makati City Government, Green Independent Power Producer (GRIPP), and Greenpeace, will now follow a daily route within Bel-Air Village going to Rockwell Center, picking up passengers hourly for two months as part of its longer commercial and technical testing.

A stellar idea, but I hope this will not just be confined exclusively to those places. It’s a nice start, but I think it’s much better to get the message out to a wider portion of Metro Manila.