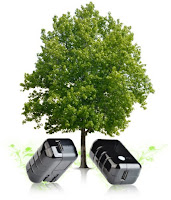 A lot of people tend to forget that leaving their chargers plugged in even without their phones still uses up a bit of power. AT&T; is offering a balm for this forgetfulness with the ZERO Charger, which will be released soon. The ZERO Charger is said to “outperform” other chargers by shutting down automatically when it’s not in use, so you’ll “never have to unplug your charger again!”

It means well, but why would you ever leave your charger plugged in in the first place? Of course, I’m speaking as someone who obsessively unplugs everything after use.